Last Week, Ontology announced the official deployment of a TestNet supporting EVM and opened the EVM compatible public beta to developers around the world. At the same time, the “Ontology Security Vulnerability and Threat Intelligence Bounty Programme” was officially launched in cooperation with SlowMist, a well-known code auditing agency. The top reward for reporting a vulnerability is $12,000 in ONG.

In order to encourage community developers to quickly and easily familiarize themselves with the Ontology EVM development environment, we specially prepared a “Handbook for Dummies”, which explains the essentials of Ontology EVM contract development.

In Part 1, we introduced the ChainID, RPC URL, browser address and other configuration information related to the Ontology EVM. Developers can configure MetaMask wallets to the Ontology network based on the above information. In this section, we introduce the tools for developing and deploying EVM contracts on Ontology, and how to use MetaMask plug-in wallets to manage Ethereum wallets.

Since the EVM contract is developed in the Solidity language, we have detailed how to build the Remix, Truffle and Hardhat development environment, and enter a series of work such as contract development, compilation, deployment, and debugging. In addition, developers can also directly reuse the existing Ethereum contract framework to develop and deploy EVM contracts on Ontology.

Below we use a Hello World contract example to show how to use Remix.

To use Remix for the first time, you need to find and add the Solidity Compiler and Deploy and Run Transactions modules to the compiler in PLUGIN MANAGER. 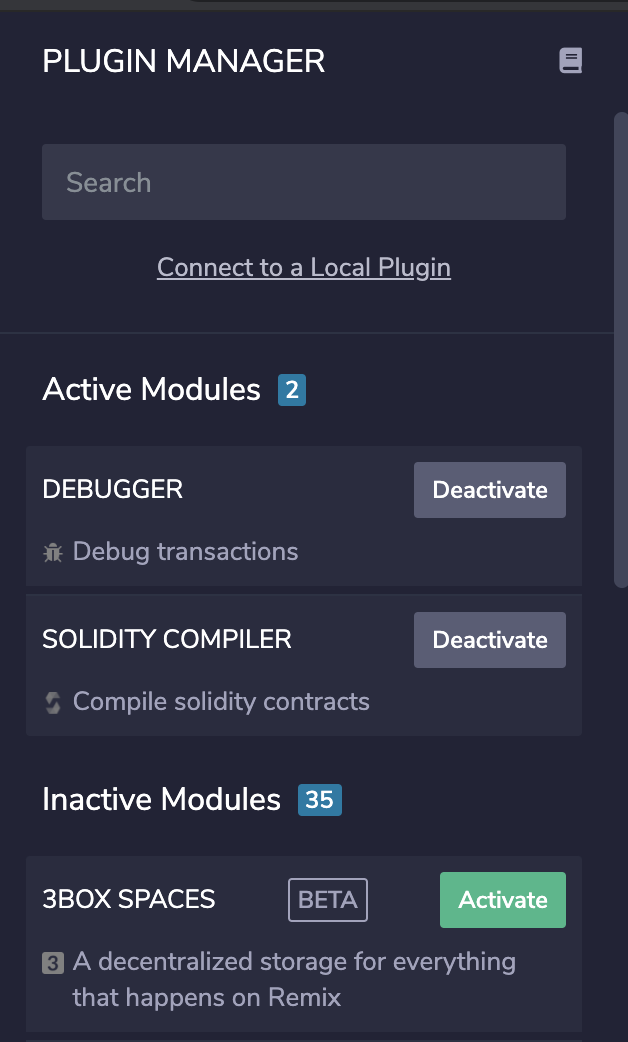 Next, select the Solidity environment, create a new file and name it HelloWorld.sol. Then, copy the Hello World contract code that has been written to this file. 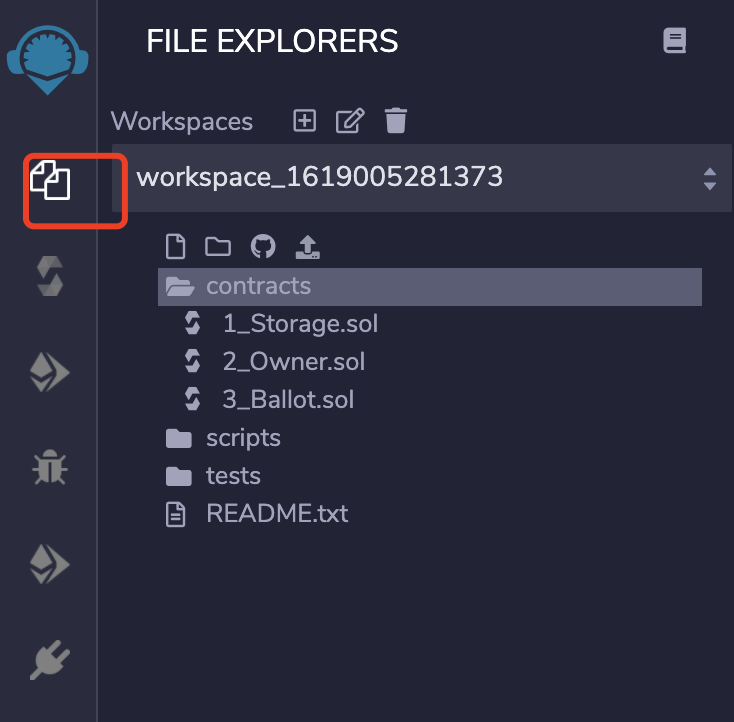 Then, select “Injected Web3” in the Remix environment, and finally click “Deploy” to complete the contract deployment. 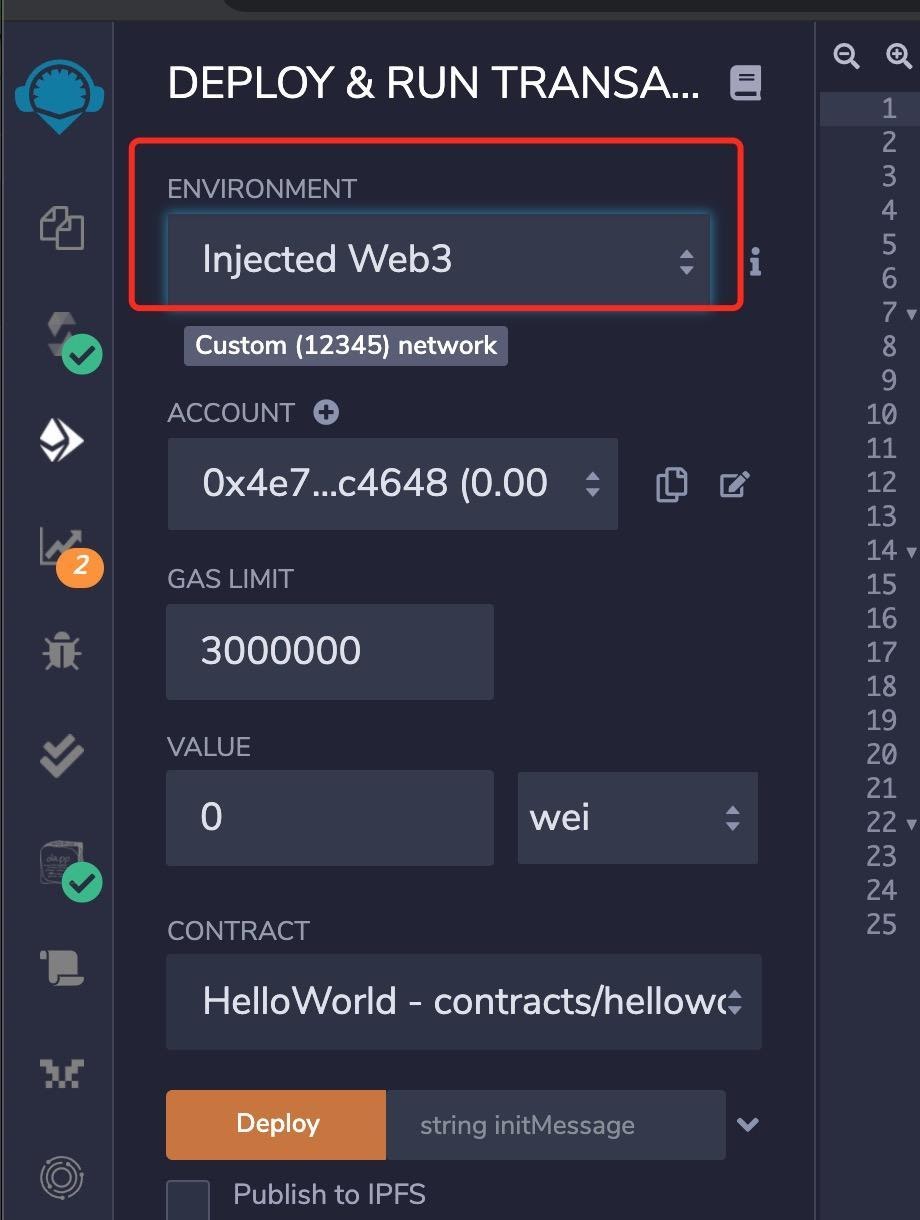 Truffle is a framework used to assist in the development, testing and management of Ethereum smart contracts. For official documents, please refer to this link.

Below we use this test code as an example to introduce the use of Truffle.

To initialize the development environment, first install the configuration files required by the Truffle environment.

Then install Truffle with the following command.

First create .secret to store the test mnemonic or private key (can be found in MetaMask)

Then modify the truffle-config file as follows 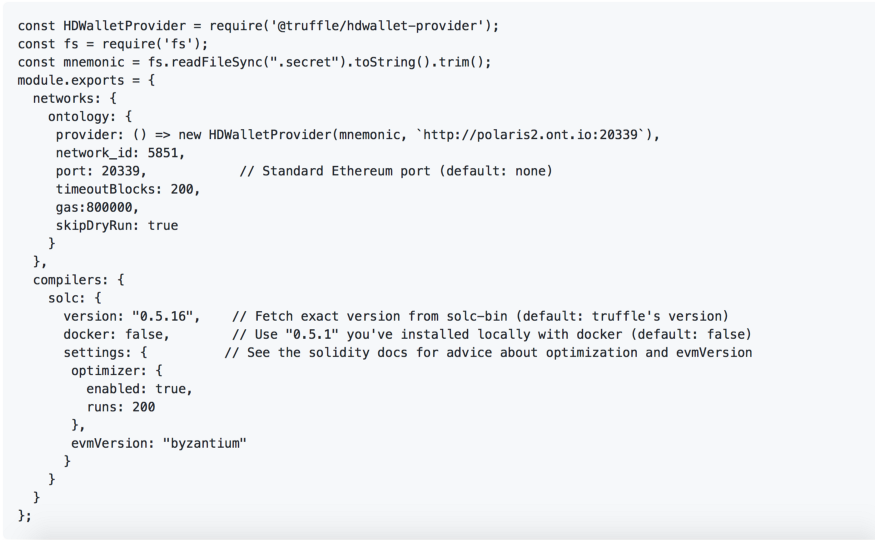 2.2.3 Deploy the contract to the Ontology network

Execute the following command to deploy the contract.

If the following output is displayed, the deployment is successful.

Note: Try not to use Ethereum token units (such as wei, gwei, ether, etc.) when writing test scripts. 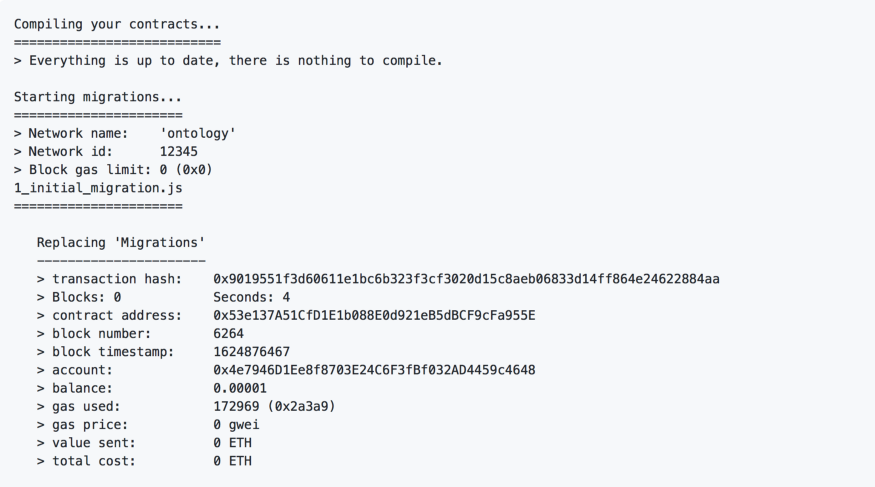 Hardhat is a development environment for compiling, deploying, testing and debugging Ethereum applications. Below we use this test code as an example to introduce the use of Hardhat.

Modify the hardhat.config.js file according to the following code 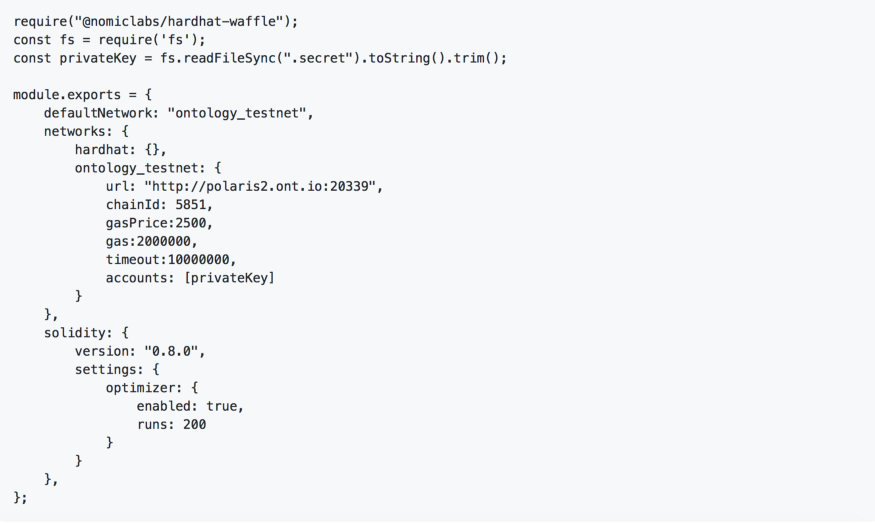 Execute the following command in the project root directory to deploy the contract to the Ontology testnet.

3. Use MetaMask to Manage Keys

MetaMask is a non-custodial wallet. The user’s private key is encrypted with mnemonic words and stored in the local browser. Once the user loses the private key, the use of the wallet cannot be restored. MetaMask connects to Ethereum through Infura. For more detailed information, please click here.

The first step is to install the Web3 environment in the dApp:

Create a new file named web3.js and copy the following code to the file: 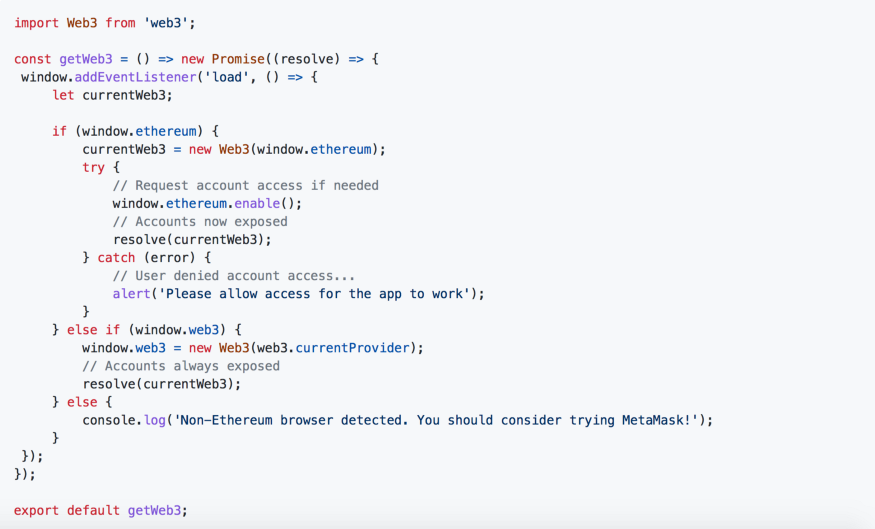 In short, as long as the MetaMask plug-in is installed on the Chrome browser, the Ethereum global variable injected by the plug-in can be used.

In the second step, introduce the following code into your client,

We need to obtain an account from the web3 instance created above to send transactions.

The getAccounts() function returns all accounts of the user in MetaMask. accounts[0] is the account currently selected by the user.

After completing the above steps, initialize your contract.

Now you can use the contract instance you just created to call any function you want. What needs special explanation is: the function call() is used to complete the pre-execution operation of the contract, for example:

The function send() is used to call the contract to change the state of the contract, for example:

Stay tuned for Part 3, for a demonstration of the Ontology EVM contract development process!